Beef chimichanga is the crispy fried version of the burrito

Like many foods, a beef chimichanga was created by chance.  When in the kitchen setting out to create a dish you often have a recipe, concept or idea in mind to come up with the dish you have in mind.  Whether you are setting out to feed your family or you are working in a restaurant or food service your task has been to feed someone.  It maybe that someone is yourself. In the case of this popular treat, the chimichanga we would have to look at other Mexican style foods.

So Chimichanga, hum culturally across the globe people often take foods and wrap them in something.  China uses mandarin pancakes and won ton wrappers.  Greeks use grape leaves to wrap a combination of meat and rice, while the polish wrap rice and meat in cabbage leaves.  Wealthier cultures wrap meat around things like the Porchetta or Brasciola of the Italians.  The French make chicken cordon blue, and the Russians Chicken Kiev.

There may be no culture that more dominantly wraps their food then the Mexican culture.  They will wrap enchiladas, quesadillas burritos and, the topic here beef chimichangas.  While the chimichanga is most closely associated with Mexican food, the origins are said to have been created in New Mexico.

The story gives credit in 2 parts.  The first is that of a restaurant where the chef claims to have dropped a burrito in the fryer by accident.  This was in the 1920’s when this restaurant broke through with this new classic dish.  A burrito is a tortilla wrapped food that resembles a large egg roll.  It is filled with a variety of foods that may consist of rice, beans or re fried beans, cheese, cooked chicken or cooked beef.

The items are layered, re fried beans first, then rice or meat and cheese.  Then the edge sides are folded over to act as a seal for the ends.  The remaining tortilla is wrapped up in to form an oblong tubular shaped burrito, which would be just that, accept a chimichanga is placed in a pan with oil and fried to crisp on each side.  Restaurants will often place them in a fryer to fully and evenly crisp the exterior.

Once crisped up the interior remains moist, and once brought to an internal temperature of 165 the chimichanga is hot and ready to eat.  Often times, like many Mexican dishes, the Chimichanga is served with a sauce, queso, salsa or both.  Queso is a subtly spicy cream sauce that accompanies many wrapped Mexican dishes.

The other story lays claim to the chimichanga to a restaurant again in New Mexico in 1955.  This restaurant states it began offering deep fried burritos to its customers.

I would portray that because of the name and the meaning that the first claim may indeed be the founder of the chimichanga.  Chi-mi is really a slang curse word that essentially would support the fact that the result was an unintended accident. Whichever means that they did come about they truly became a staple on many menus.

While the menu item is documented, talk of some of the means that foods came about through the way’s cultures handled food products is interesting conversation.  While many 3rd world countries don’t have the conveniences that we come to expect here in the US, refrigeration only became available to the general populous here in the US in the early 1920’s.

Mexico, no different to most cultures of the times, preserved foods in the way that they new how.  With the intense heat of the central and south American climate it became natural to dry foods.  Peppers, a big part of the Mexican diet, dried in many varieties as a staple of the diets of these people.  These peppers have become broadly available through retail outlets and commercial grocery vendors.  Ancho, Pablano, Jalapeno to name a few.

These dried peppers ground are the source for our chili powders that we use. They come in a variety of options from dark ancho to blends of several variety's.

There is no reason to look any further for a recipe.  The Best chimichanga recipe is here.  Take a moment and anticipate, a crisp delicious rich flavored savory South Western treat. While you anticipate I will review the recipe of a chimichanga.  Take your tortilla, use a spoon and spread some refried beans, seasoned meat, cheese in the center line of the tortilla.  You will fold the tortilla ends over one inch on each end.  Roll the middle up starting with your thumb s.  Pan fry or deep fry the wrapped tortilla  and serve with queso and salsa.

This recipe is one version of a chimichanga.  The chimichanga,being a deep fried burrito, has a number of options.  Chicken, pork and even vegetarian for meat selections.  Different cheeses, maybe some salsa Verde, maybe a slice of jalapeno or some spiced rice.  The  meal is yours, make everyone love it.  Don't you just like to say chimichanga.

The chimichanga is the crispy deep fried (or pan-fried) version of the burrito.  A tortilla with beans either refried or whole a selection of meat, cheese and could have rice then wrapped and fried. Often accompanied by sauces, such as tomatillo, queso, or salsa
Prep Time15 mins
Want more recipes like this?Sign up for Chef Thymes!
Calories: 2014kcal 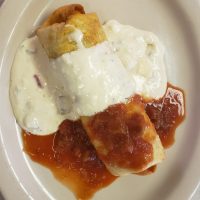 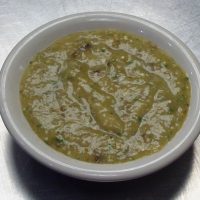